Reigniting a childhood passion: in the studio with Giulietta Hextall

Tucked away off Temple Street near Bethnal Green is Crown Works, a Victorian cobbled mews behind a black iron gate. It’s sectioned off into units occupied by designers, photographers, architects, artists and, in the far-right corner, a pottery run by Giulietta Hextall. It’s small but perfectly formed: light, bright and serene, despite its shelves being packed with students’ and professionals’ latest pieces at various stages of the firing process.

As soon as we arrive, Giulietta takes us on an in-depth tour of the space, asking us to feel how light or heavy pieces are, and rolling greenware – that’s objects that have been shaped but not yet bisque fired – on our faces to assess their moisture levels: ‘Sorry’, she says. ‘Is that weird? I tend to geek out a bit. I get easily sidetracked.’

Her passion for pottery infuses everything she says, as though she can’t totally believe that this is how she gets to spend her time. ‘I always wanted to do pottery; I fell in love with it when I was 14. But, for various reasons I won’t go into, I ended up studying English literature and became a photojournalist and filmmaker specialising in documentaries. I worked in New York for a number of years on a photo editing desk – and it was creative and interesting. But when I moved back to London, I found it really difficult to get going again. I actually did it for another 10 years, but the whole time I was thinking I should really find something more secure. And that, weirdly, turned out to be pottery.’

Grabbing a reddish-brown jug from one of the many shelves, Giulietta reminisces about driving through Cornwall and passing The Leach Pottery, seeing they had classes, and deciding on a whim to change all of her plans so she could attend: ‘I signed up for a three-day course, and then nobody else showed up. They were going to cancel it but they knew I’d totally rearranged my life to be there, so I ended up having this intense one-on-one session. Then when it was nearly time to go back, I got so worried and kept saying, ‘Oh god, now I have to go back to London and do this photography stuff.’ And the teacher told me that I had to find a way to work with this material every day instead. So I did.’

Her journey to becoming a potter, and setting up and running a pottery school, all goes back to that teenage ambition: ‘I started doing pottery on the side and uploading photos of what I’d made to Instagram. My teacher from school found me on there and saw I’d labelled one of my glazes wrongly – and, 20 years on, he just couldn’t help himself, he had to correct me. Anyway, he ended up inviting me to Australia to become his apprentice. And next month, one of my students, my first apprentice here, is going out to Australia to work with him. It’s all been quite cyclical and serendipitous.’

Working with clay in her studio exhilarates her at her highs, and soothes her at her lows: ‘I love the material, it really calms me down, it grounds me. It’s a break from screen time. It’s physical and you get something tangible at the end of it. If I’ve had a bad day, kneading clay and weighing it all out helps; it’s like a real warm-up. And there’s always something to do here: recycle, make a glaze, clean the floor. It’s all cathartic.’

A far cry from a few shots on Instagram, Giulietta has worked on numerous high-profile commissions which, she says, have been brilliant opportunities to practise new forms. But she’d like to spend more time focusing on her own work: ‘Commissions often have deadlines, which with pottery can be so stressful. You can open up the kiln to find everything is ruined, and it can be three months’ work. Every potter has a story about throwing a wobbly when something’s gone wrong – but that’s also why it feels so amazing when things go right.’

Although she used to create huge, hand-sculpted, decorative pieces, she now focuses on smaller bowls and cups thrown on the wheel: ‘I get the biggest kick from seeing my pieces being used in the home.

‘When you’ve made something yourself and you see it being held and used in the home, that’s incredibly satisfying. Or if you’ve given a piece to someone else, it’s like giving them a little bit of you. I had one student who, after a few classes, got rid of anything that wasn’t handmade from her kitchen cupboards. She realised how different she felt interacting with a piece that had been crafted, versus one that had come off a production line. Everything about it is different; I even think food tastes better eaten off it.

‘Every time I make a new shape, I try to take it home with me to see how it works and how its shape could be improved. It’s all a bit obsessive, isn’t it? But it’s the details that make all the difference.’

Giulietta is interested not just in trying new shapes and styles, but in making her own glazes and effects: ‘There’s this guy who lives on a canal boat, who kindly gives me his ash to put into a glaze. It changes colour depends on what’s been burnt in the fireplace. Eventually, one day, I’d love to move to Cornwall and open up a pottery, not a school. It’d be a place to spend time, to develop my own glazes from seaweed. I’d really like to work with local materials. This all feels quite far off, though.’

And her top tip for budding potters? ‘It’s a learnt art and a physical process. Creative people often really struggle, because they have an idea of what they want to make and that they’ll be good at it. But if you get frustrated, that comes out in the pot. You have to embrace how difficult it’s going to be, and be happy to get things wrong. That’s why it’s so satisfying when it works. If it was really easy, nobody would be obsessed.’

She also has to pay keen attention to the soundtrack: too intense, and potters sub-consciously put their feet down and their work starts flying off the wheel. Fellow ceramicist and teacher Naomi chips in at this point to say, ‘It’s really embarrassing, but at my last studio it was having Moby on that produced my students’ smoothest and most balanced pots. When I realised, I was like… Moby? Really?’ 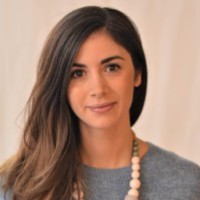